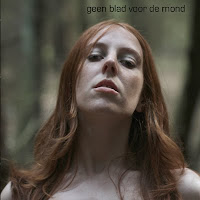 JAN KEES HELMS & AL CONROY & JAN-M IVERSEN - GEEN BLAD VOOR DE MOND (3"CDR by Lor Tapes)
Every month Jan Kees Helms organises an exhibition in his home town Amersfoort and invites other artists. In November the theme was 'Geen Blad Voor De Mond', which roughly translates as 'you can say it all'. Helms produced two video's and on this 3"CDR you'll find the soundtracks, one by Jan-M Iversen and one by Al Conroy (whom we remember from a previous life as Not Half). Iversen's piece deals with sounds recorded from Norwegian woods, with the addition of some sounds of unknown origin. A nice piece of drone music. The same piece is also the starting point for a piece by Iversen with extra sound material by Helms, supposedly with voices from a heavy debate in Dutch parliament, but that was something hard to tell. The three pieces by Conroy are all short based on the voice of Geert Wilders, again something I couldn't know if I wasn't presented this information. I am not sure, although I can guess, what this all has to do with 'you can say it all', but even without the political connotations quite a nice release. Small but nice, and check out Helms' Youtube also for some excellent short films.